Keith Langford is now playing with EA7 Emporio Armani Milan (Italy, Euroleague), one of the most important teams in European basketball history and owned by Giorgio Armani: his name speaks for itself.

In today’s edition of the most renowned Italian sports newspaper, La Gazzetta dello Sport, you can find my interview with Langford claiming the need of a Players Union for the US ballers that “take their talents” to Europe.

The interview is following three tweets from Langford about his brother Kevin’s issues with former team in Greece. 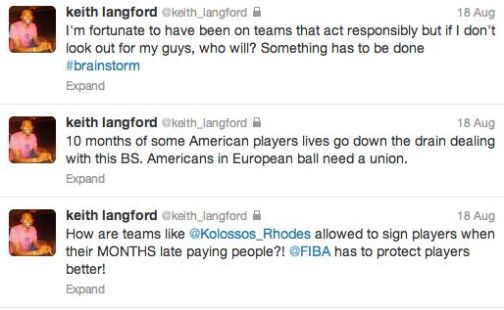 Here what Keith had to say:

Tell me about your tweets, and you idea.

“I spent my summer keeping up with the game, reading Twitter and online. It started with my brother, but I’ve just seen there are a lot of issues with players and clubs. It was frustrating to hear that, then I start tweeting about it”.

Did you start working on it?

“I’ve started to work with Linton Johnson [Sassari], we’re trying to understand how to run a Union in order to help other players. It’s important that a guy that’s not having trouble, that is playing for the right team to say something. If the guys on top don’t speak up, nothing can never happen”.

What the next steps will be?

“Linton is in touch with Billy Hunter, the former NBPA president, to get informations. We’ll talk and we’ll meet with him. We know that we have to talk with European leagues and organizations and FIBA, but before getting there we have to be ready”.

How do you rate the agents’ role in this business?

“There are good agents and bad agents. Their job is to put their clients in the best situation possible, but I don’t think the agents’ role really concerns this situation. I think that the most important thing is that American guys get together and try to form something in order to protect all of us”.

Are you satisfied about the level of the cooperation between American and European agents?

“No, I’m not. There are agents that only work for their commission, and they’re not doing their job properly following their client’s career step by step. Me, Johnson and other players with our experience have to get together to fill a gap. Many times even the big American agencies are sending their players without even know where they are going”.

American players often say “I play overseas”. But Europe is not the same everywhere…

“Overseas means nothing. The countries and the clubs are so different. Americans need a platform to prepare them before coming to Europe. There are guys that don’t even know how to call home, almost 100% ignores the FIBA rules. I’ve read a story about Pierre Jackson, who had a great NCAA career but left Villeurbanne because he was homesick. If we could have helped him, maybe he could have saved his contract”.

What a “typical” American player know about Europe before coming here?

“You can do a couple of things, most of the time: Google and check the team’s site. The typical case, when you say to your family that you’re going to play in Europe, they don’t even know where is it. Your relatives and your friends can’t understand where are you and how things are going until they come over here to see you. For them it doesn’t matter if you play in Cremona or Milan, in Portugal or Barcelona. You’re just far from home”.

What can you concretely do?

“Why don’t we make something similar to the NBA Rookie Transition Program? We could organize meetings, classes and other things to let guys understand where they are going, the lifestyle and how to fit in. It takes months to feel comfortable in another country, but you have to be 100% focused on basketball too”.

“One example is the LOC (Letter of Clearance). I can understand that a club can be in trouble, but if you’re not getting your money and you have the chance to play somewhere else, and provide to your family, it has to be easier to do it. Then, the season length is another issue: It’s 10 months potentially, I think it’s too much. None of this is meant to be controversial, just to make everyones experiences more enjoyable”.

Will you meet the GIBA [the Italian players union], too?

“Of course we will. GIBA has always been great with us. Mason Rocca took care of this in the past, but this organization only works on the Italian League. What I want to do is something that can help everybody in Europe”.